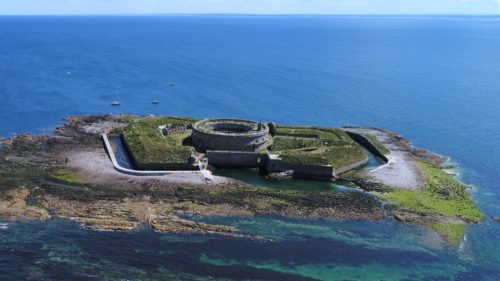 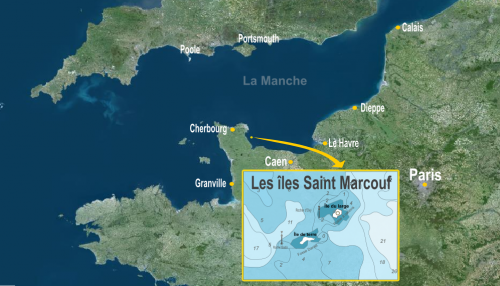 Located at 7 kilometers, from the east coast of Cotentin, between Grandcamp and Saint Vaast la Hougue, the islands 0Saint Marcouf – Island Large and island Terre – are the sole islands of the Manche East coast, up to the Netherlands, and with the Chausey islands, the only islands, which have remained French, in the Normandy coast. The island Large, is the property of the State, landing is forbidden, for safety measures since 1989.

In the VIth century, the islands were used, as a retreat for the monks from the Nantus Abbey, of which Marcouf – or Marcoul – whom was canonized, after his death in 558, the islands were named, after him. It, then, became a shelter, for corsairs and pirates, due to its geographic situation. During the period Terror, it was occupied by the English people, and used as a landmark, to immigrate to England. Taken over and walled by Napoleon 1st, in 1803, then, improved by Napoleon III, it was used as a prison for the Communards in 1871. Demilitarized, it is then deserted, until the occupation by the Germans, and mined, when the Wall of the Atlantic, was erected.

First French territory, to be liberated on the 6th of June 1944.

On the D-Day landing, the allied are convinced, the Germans had installed an observation post, on the Saint – Marcouf islands. Hence, they decided to send a squad, before landing on the beaches.
On the 6th of June 1944, at 4.30 am, a squad of 4 men, only, armed with knives, under the orders of Sargent Harvey S.Olson, swam towards the islands, for a mission of recognition and mark up. This operation resulted, in the Saint – Marcouf islands, to be the first territory to be liberated, on Landing Day.

Several members of the squad, were awarded, for their action, long after, in 2002. On the island, the squad, was followed by a detachment of 132 soldiers, under the command of Lieutenant-Colonel Edward C.Dunn. At 5.30 am, the detachment landed, as the islands are occupied, but the mines, installed by the Germans, injured 17 soldiers, and killed 2 soldiers. With the involvement of the Departmental Council of Manche, the association installed a commemorative plaque, on the island in 2014, year of the 70th Anniversary of the D-Day Landing.

At the core of the battle 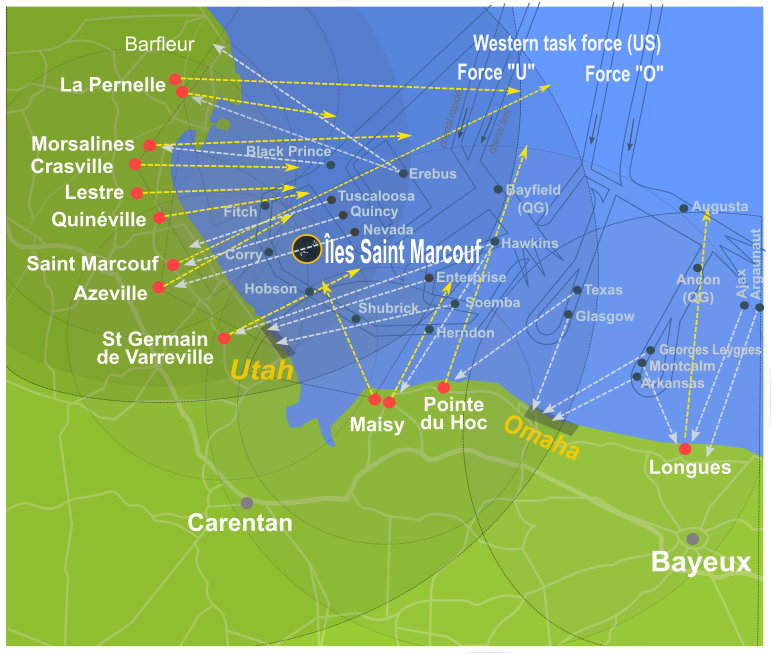 Because of their strategic location, facing Utah Beach, the islands were at the heart of the landing events. As early, as 5 am, the Saint–Marcouf artillery battery, on the ground, fires on the island, to attempt to remove the detachment, in place. The island is surrounded, by a dozen of allied ships, with the mission to destroy the coastal defenses. The destroyer Corry is sunk, a stone’s throw, off the island.

Large island, still holds the stigmas of the battle, and the association, while, carrying out work, uncovered various objects, testifying the presence of the Germans and the Allies. 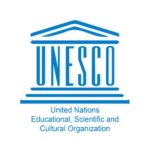 Having initiated the ranking of the island, as Historic Monument, the association was granted the integration of the Saint – Marcouf islands, within the perimeter of the D-Day Landing beaches, they are candidates to be included in the list of the UNESCO World Heritage. The final decision, for the ranking of the beaches, is not known, yet.
The island Large could, well join, the UNESCO World Heritage, giving an additional sense to the renovation work, undertaken by the association.

The association « The friends of Saint-Marcouf Ile du Large »

Founded in 2003, based on a previous association, in the seventies, it holds, to date, over 500 members. It is recognized of public interest, and mainly financed, by subscriptions and donations. It is supported by the local collectivities in Normandy, communes, inter-communality, department and region. It integrates experts in various domains: legal, history, logistics, boating. The association is involved, in renovation work and marketing, to make the island known and raise the public interest, and the locals interest, as to its future. 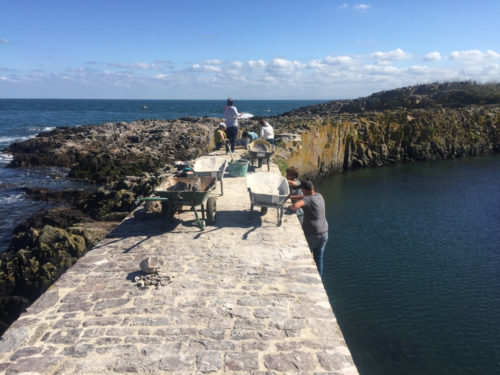 Our plan, is the reintegration of the island Large, in the cultural, economic and social environment, in Normandy and in France. Our actions focus, on the renovation and access to the site, installation of moorings to greet yachtsmen, and progressive opening of the site, and its buildings to the public. Every year, we plan and finance building work, supervised by the government. The work is carried out, by volunteers and professionals, on building sites, integration and training courses, and work by companies. The work, carried out by volunteers, each summer, regroup over one hundred people, of all backgrounds. Thanks to the association, the exterior dikes of the island, were saved, but, so much needs doing, your support is essential, to continue the renovation work.

You can support our action, by subscribing to the association, from 20 Euros, per year, by making donations, which are tax deductible in France, by joining us, on site, as volunteers, or any other means of sponsorship. Please refer to our website: www.ilesaintmarcouf.com, to subscribe, and to join our volunteers building sites. 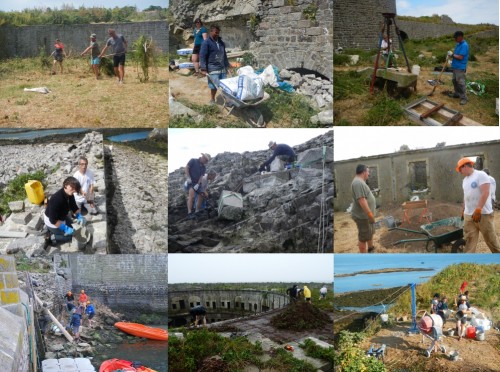